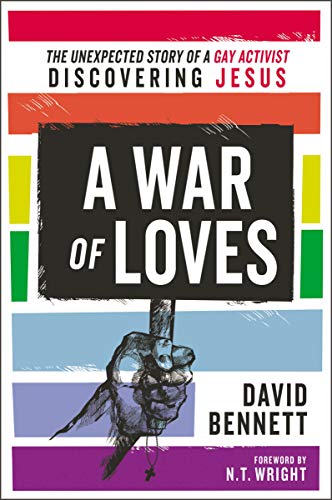 Title: A War of Loves
Author: David Bennett
Publisher: Zondervan
Publishing Year: 2018
Pages: 266
My Rating: 4 out of 5 (1 meaning I hated the book, 5 meaning I loved the book)

There is probably no issue that is more hotly debated among Evangelicals than this issue of homosexuality.  The issue is at the forefront the so-called cultural wars and is constantly being brought to our attention in the media.  How as we as Christians supposed to remain faithful to Scripture but at the same time love our gay neighbors? Are we doomed to bigotry and hate?  Its a topic I’ve thought much about so I was thrilled at the chance to review this new book, A War of Loves by David Bennett.

Basically, the book is about Bennett’s struggle as a celibate, gay Christian.  As a teenager he came out as gay and abandoned the Christian faith altogether as he sought to be true to himself and pursue love in the arms of another man.  Yet, through his search he was plagued by the fact that nothing seem to satisfy his basic emotional needs. He tried researching various religions and philosophies, became a gay rights activist and engaged in several homosexual relationships – not one led to satisfaction.  Then suddenly, God broke through and changed his heart of stone to a heart of flesh. God worked through both friends and family to draw David to Himself. But then he was left with a new struggle, how does he reconcile his same sex attraction with his belief in Scripture? The rest of the book details how David sees his sexual struggle as an opportunity to bring God more glory.  He decided to live a celibate life choosing to find his identity in Christ rather than in his sexuality.

There are many positive aspects about this book that I really enjoyed.  First, I greatly appreciated David’s brutal honesty and candor. He spares no detail in describing his struggles before and after salvation.  He gave me a glimpse into a world I never knew existed. Second, the book sought to slay a growing and ever-present idol in the church – marriage and family.  He is not suggesting these are bad things in and of themselves but can become idolatrous. God does love and have a plan for single men and women in church. Not everyone will be married.  Also, the church seemingly ignores the need for meaningful, platonic same-sex friendships. David and Jonathan show us the value of such a friendship. Third, it is fascinating to see a man struggling through his homosexuality but still submitting to the Scriptures despite what his own desires tell him.  There is a lesson here for all of us as we struggle with sins that seem so natural yet contradict the will of God. Finally, there is a stunning rebuke of callousness and ignorance of the Evangelical church toward the homosexual community. All men made in the image of God are worthy of dignity and respect.  Instead we are often guilty of treating homosexuals as “icky” and evil without the love and compassion Jesus showed toward lost sinners.

However, there were a few parts of the book that I found wanting.  The main issue I has was the large emphasis in the book about personal experience, individual prophecies and hearing God’s voice audibly.   I would rather have seen an objective defense of Scripture rather than a subjective experience in defending the Christian faith. I know the author is capable of such a defense, but it was not clear in this book.

But, all in all, the book is well-worth reading and the story is one that needs to be heard as we think through this issue within the church.  I would urge you to get your copy today, and perhaps lend it to a friend later.

Disclaimer: This book was provided by the publisher for review. I was under no obligation to offer a favorable review.